Version 1.4 of VSquare has just been released and once again we are adding a host of new features. It makes us proud to see VSquare moving forward by continuously enhancing the package with new, highly demanded functionalities.
This time there's so much to talk about that we cannot add it all in one post. We will highlight the main features of this version.

Exchange 2013
As many of our customers requested, VSquare now supports full extraction and restore of Exchange 2013 mailboxes. As for the previously supported 2010 version, we allow you to restore straight from your virtual disk backup.
Just click on a previous Exchange machine backup, select mail restore and you're good to go. Also, as enterprise mailboxes and attachment sizes keep growing, we spent a great deal of time optimizing the restoring process speed
and we're thrilled to announce that restore is now at least 100% faster than in the previous version.

Service Windows
By splitting all the automatic and configurable tasks in different categories with different timings, VSquare now allows you to manage service windows for every operation. You can now choose, for example, to upload to cloud only
overnight and have any upload task idle during days or execute deduplicated disk maintenance only during weekends. Also, for every long running task you may specify for how long it can run.

Desktop Agent
The adoption of the VSquare Desktop Agent has been overwhelming and today millions of files are already secured by VSquare on a number of file servers. Version 1.2 of our Agent Service not only brings support for fully mountable
VHDX backups but also for full ACL backup. With the new update all restored files and folders will be back with original permissions once you choose to restore them. 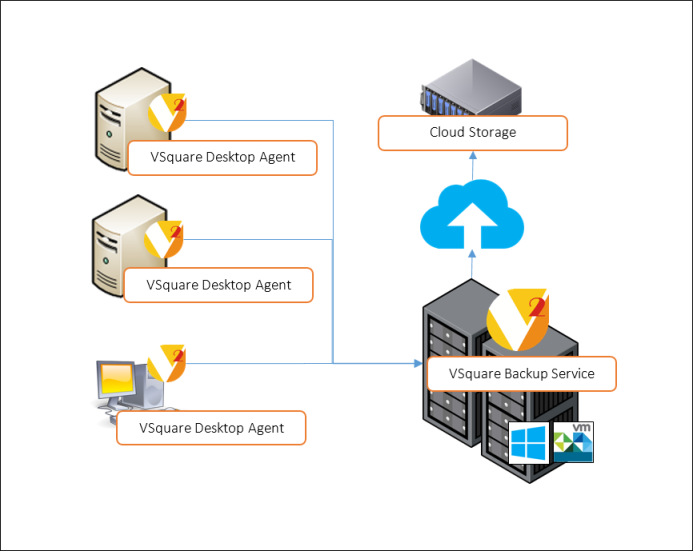 Check below the full patch notes for version 1.4.3!

Server
- You can now configure VSquare service windows. This new configuration allows control of when VSquare executes specific tasks and for how much time.
You can freely choose, for example, to have uploads running only by night o deduplication maintenance only on specific days.

Restore
- File restore speed has been greatly increased by merging the initial indexing phase with contextual restore.
Restoring a large number of files should be at least three times faster that with previous versions of VSquare.

Backup
- Backup reporting has been upgraded to include different reporting targets. Beside typical e-mail reports you can now choose to have backup results automatically exported to CSV or PDF on a specific folder or to a SharePoint documents list.
Standard pdf and csv reporting is available starting from Professional plans while SharePoint automatic upload from Enterprise plan.
- Simultaneous virtual and agent based backups of the same machine are now fully supported.
- Updated VMware snapshot mode to allow retrival of current snapshot on specific VMware vCenter versions
- Added a new option that forces VSquare to keep backup folders even when backup fails.
- Fixed an inline deduplication error causing missing folders to halt the publishing process
- Fixed am issue with granular files & folder backup plugin that could cause an error when encountering file names with special characters.
- Added a new option on each VMWare VM to enable non-quiesced backups.

Exchange
- Exchange 2013 mailbox, messages and attachments restore is now fully supported starting from Professional plans.
- Restore speed of mailboxes has been dramatically increased to allow for very big mailboxes to be restored whithin an acceptable timeframe
- Fixed a bug that would cause deduplicated mount to be dismounted when a mounted exchange db is dismounted
- Mounted exchange db storages should be now correctly dismounted when operations are completed

Success! Your message has been posted. It will be online as soon as moderators approve it.
Ouch! There was an error sending your message. Please try again.